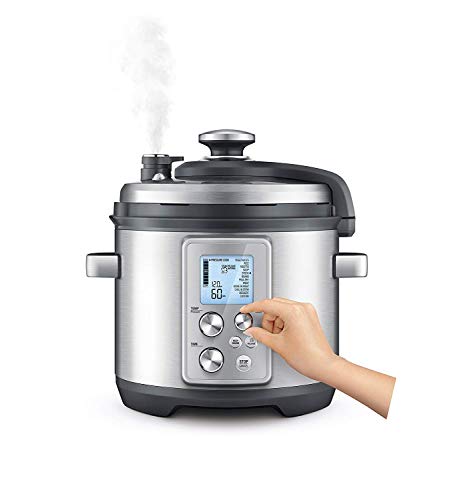 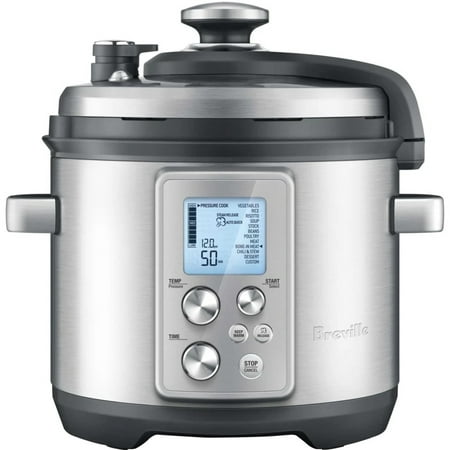 The Breville Fast Slow Pro may be used to pressure cook, slow cook, reduce steam, sear, and sauté. It has a 6-quart/ 6-liter capacity. Choose from various pre-sets for cooking stew, risotto, rice, and vegetables and meats, or manually control the pressure level and cooking period; it gives the best of both worlds and is an attractive option for seasoned cooks and novices.

As with most electric pressure cookers on the market today, the Breville Fast Slow Pro has a steam release button on the front rather than a lever on the top, making it much less likely to burn your hands. There is also a useful keep warm option.

Multi-cookers are not the most aesthetically pleasing kitchen appliances, but Breville has made this model sleek and streamlined. When combined with its distinctive stainless steel design, it looks better on the countertop than many competitors.

The primary interface is easy to manage with a clear LCD. However, the cooking bowl has a minimum capacity of 1 quart/ 1 liter. Therefore it is not the most excellent option for cooking minor quantities.

The Fast Slow Pro is genuinely unique in meat processing. It retained more moisture and tenderness than other versions, particularly when cooking ribs. It was also the most successful model for searing meat that we discovered. However, even this device cannot replicate the searing intensity of an intense flame.

If you like a perfect sear, we recommend doing so on the stovetop and then using a pressure cooker to seal in the flavor. The Fast Slow Pro also produced the most tender and moist rice during our tests, retaining more moisture. However, the difference in rice quality between Fast Slow Pro and the remainder was less pronounced than that of beef.

The Fast Slow Pro provides more pressure settings than any other model. Most machines let you adjust the pressure to low, moderate, or high, but this one has ten levels. This did not affect the cooking quality, but it is a valuable tool for those who like to experiment with recipes.

Again, it delivers a slight but observable advantage over the competition at a significantly higher price. The other models we tested were still capable of cooking excellent meat and rice, so you’ll need to determine if these slight enhancements are worth the additional expense.

The ceramic-coated cooking bowl is safe for the dishwasher. The lid is hinged, so there’s no need to find a spot to rest it while monitoring your meal. It’s also removable and dishwasher safe but requires a screwdriver to remove, making it inconvenient to clean every time.

The Fast Slow Pro is constructed with the same superior craftsmanship. It was a bit of a gamble to spend more than twice as much as the other popular pressure cooker, Instant Pot, but I believed the enhanced controls (simplified) and superior build quality would be worth it.

In addition, I was able to justify the expense because the Breville would replace our slow cooker and rice cooker in our tiny kitchen cupboard.

I could have saved money by purchasing the less expensive Instant Pot. Still, since the Breville performs the same function as other appliances, I believe it is worthwhile to invest in a higher-quality, simpler-to-use equipment.

In light of the preceding, I am ecstatic after preparing various meals. The Breville is an intelligent device with numerous functions. Brown rice, braised short ribs with veggies, pulled pork with green chile sauce, and baked beans have been prepared thus far. Benefits of using a slow cooker

Slow cookers are the best friend of a lazy chef, the secret weapon of a busy cook, and the backbone… Advanced Microprocessor Technology is integrated into the Instant Pot Aura 10-in-1 programmable multicooker. Replaces ten appliances with one - The…