We have long held two perspectives on bread knives. The first is that you should avoid overspending on one. Unlike chef’s knives, bread knives are difficult or impossible to re-sharpen, reducing their useful life and necessitating replacement every five years or so.

The second is that, aside from minor variations, little distinguishes one bread knife from another. As long as their serrated blades can cut bread (and a few other things, such as tomatoes), which the majority of them are, they are adequate.

After testing several bread knives for this story, we found that the latter position needed to be revised: The differences are substantial. One task stood out above all others during my testing: slicing a very tender white sandwich loaf. Only two knives—the two we’re recommending here—completed that task successfully.

What is a Bread Knife?

Among the many tools in a cook’s arsenal is a bread knife specifically designed for slicing bread. This knife designed to pierce the bread crust without compressing the bread’s soft interior. The frequency and width of the serrations are critical design elements.

In some cases, the bread knife has a straight blade on both ends and a longer serrated section in the middle. Serrated bread knives are frequently ground on only one side, resulting in a sword with a single angle.

Serrations with a low frequency – fewer teeth with a wider spacing between them – assist the blades in cutting bread quickly and cleanly.

What distinguishes them is their serrated blade, which features a saw-toothed edge capable of quickly cutting through some of the most rugged, as well as the most delicate, materials.

Why You Need a Bread Knife?

Bread knives have a specialized function in your kitchen blade arsenal. While you will not use a bread knife nearly as frequently as a chef’s knife, the true workhorse of the kitchen, they are necessary for a limited set of tasks.

A bread knife’s primary function is to slice bread. A good bread knife should be able to cut through a tough crust without mutilating or compressing the tender crumb contained within.

Other knives are frequently unsuitable for this task, as tough crusts can damage finely sharpened blade edges, and any blade that is not sharp enough may require excessive downward pressure, crushing the airy bread. Similar tasks, such as leveling the delicate and tender layers of a cake, can be accomplished with bread knives.

Unless you keep all of your other knives razor-sharp, a bread knife is frequently your best bet for successfully slicing through a ripe tomato without destroying it. Bread knives, with their teeth, glide effortlessly through tomato skin without requiring you to apply pressure and risk crushing the delicate flesh beneath.

Bread knives are also helpful for cutting thick-skinned melons and tough winter squash, as their teeth glide effortlessly through harsh, resistant peels, where other knives frequently become stuck and fail.

A straight-edged slicing knife is ideal for carving large pieces of meat, such as a prime rib or brisket, but most of us do not carve large roasts frequently enough at home to justify the additional space in a knife drawer. A bread knife works well as a substitute.

When it comes to selecting a bread knife, there are a few design considerations.

Bread knives are available in lengths ranging from 6′′ to 14′′ – the appropriate size is determined by the type of material you will frequently be cutting. An 8 inch (20 cm) blade is ideal for the average home cook because it is long enough to cut through largest bread but short enough to control easily. If the blade is too long, it may flex during cutting, making it difficult for home cooks to cut straight.

A bread knife is similar to a Santoku knife but has serrated teeth and is significantly longer. The length of the blade enables the cook to cut large surfaces with long, smooth strokes – similar to how a saw is used in carpentry. The serrated teeth aid the knife in gripping the bread’s texture, preventing it from collapsing due to downward pressure.

Although all of the knives we examined had the much more common pointy-toothed edge, some preferred the less common wavy-shaped design. We have a couple of wavy, serrated knives in our collection, and they’ve always been fine but not distinctive enough to convince me that the shape is inherently superior.

What surprised us the most was the wide disparity in performance we observed, even between pointy-tipped serrated knives that appeared nearly identical to our eyes. Two blades with almost identical serrations can perform wildly differently, with one excelling and the other failing miserably.

While a bread knife can be honed by running each scallop up and down honing steel, its serrated edge is significantly more difficult to sharpen than the edges of other knives. This holds for both a $200 and a $30 knife. You could send it to a professional sharpener or attempt it yourself, but we believe that would be more trouble than it is worth. Rather than that, our recommendation to most people is to simply replace their bread knife when the edge begins to wear out. Because we’re aware that we’ll need to replace my bread knife occasionally, we never spend an excessive amount on one.

When To Use Bread Knife

Whether the bread is freshly baked or several days old, the knife is equally adept at cutting straight and smooth. The bread knife will easily cut through soft white bread or crusty artisan bread.

There is one critical caveat: it is nearly impossible to choose the “best” knife of any type. Knife preference is highly subjective, and what feels good in one’s hand may not feel good in another’s. Nonetheless, the results of our testing reflect our preference not only for balance and form but also for essential cutting ability.

Along with slicing bread, bagels, and rolls, your bread knife can also be used to shave the tough skins off bell peppers and tomatoes. Serrated blades gently slice through tougher skin without crushing the juicy interior. Additionally, it is excellent for removing the rind from watermelons and honeydew. Additionally, it is ideal for slicing other baked goods, including cakes.

We were unable to test every bread knife available—there are far too many. To help us narrow down our selection, we looked at online reviews and Amazon popularity rankings.

TOJIRO High-Carbon Stainless Steel Bread Slicer 235mm with an anti-rust stainless steel blade and a natural wood handle, this bread slicer is simple but effective at slicing bread cleanly and without deforming it.

It cuts the thinnest, cleanest, and most straightforward slices of any knife, making it a pure joy to use for bread and tomatoes. This will be our go-to bread knife from now on—in fact, we’ve already placed an order to replace our current bread knives at home.

The only disadvantage is that the thin, flexible blade bowed slightly when performing heavy-duty tasks, such as having a hard squash (though it managed to get the job done regardless).

We recommend the Victorinox Swiss Army knife for its “excellent balance of handle and blade.” Who can argue with such a bright handle?” At less than $40, it’s also an excellent value.

The serrated blade and non-slip, ergonomic Fibrox handle provides ample knuckle clearance when slicing through crusty bread and hard-skinned vegetables. This 10.25-inch bread knife, made in Switzerland, weighs only 4 ounces, making it one of the lightest in the roundup.

More Options for your choices 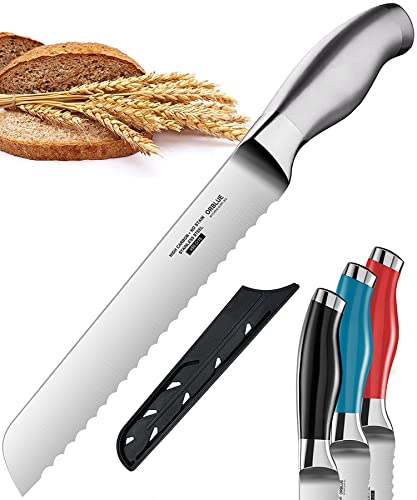 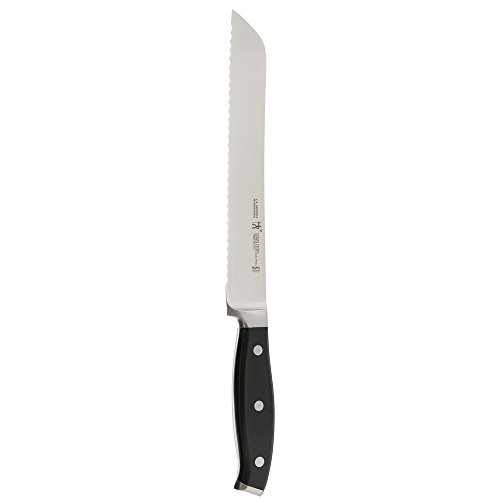 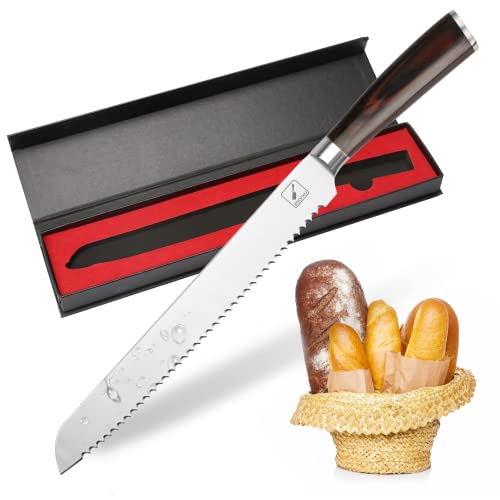 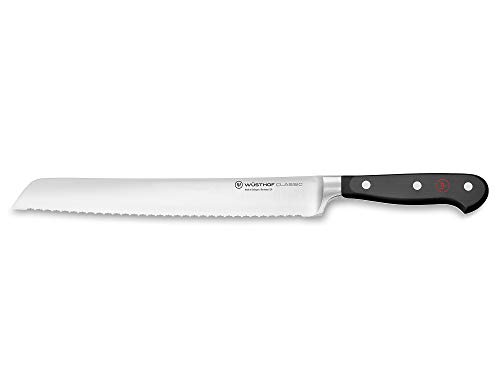 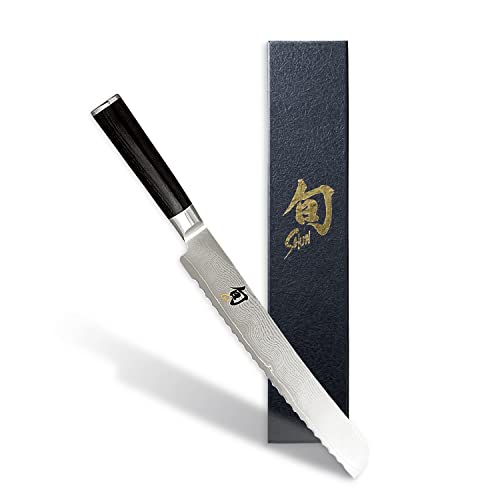 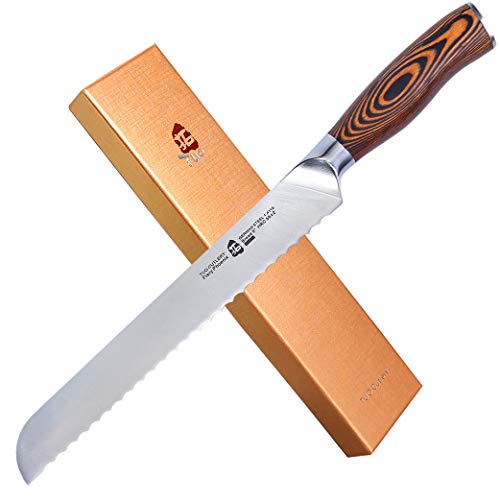 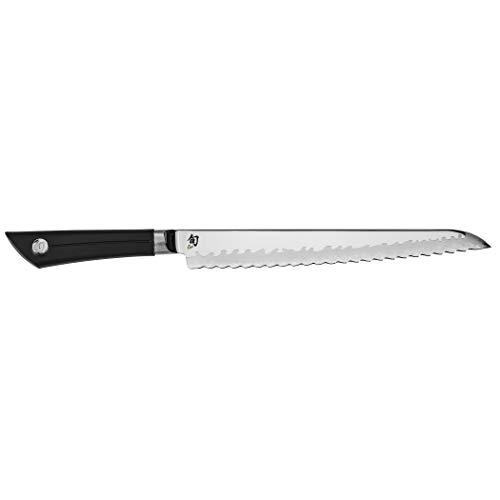 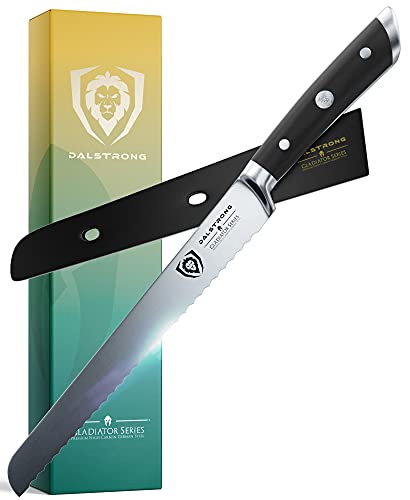 Whether you use your bread knife exclusively for slicing loaves or for various cutting tasks such as tomato slicing or carving a prime rib, a few basic features will yield the best results.

A sharp edge, well-designed serrations, and sufficient knuckle clearance contribute to maximum comfort and performance, such as thin, even slices and smooth, clean cuts.

If you don’t already have one in your knife collection, consider investing in one – they’re surprisingly versatile and practical on a wide variety of foods!

While chef’s knives are well-known for their versatility in the... 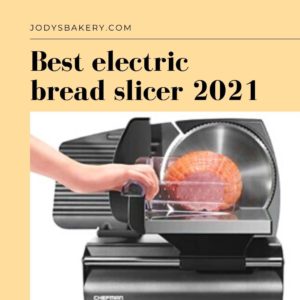 Slicing bread is a monotonous job, especially when you’re doing...