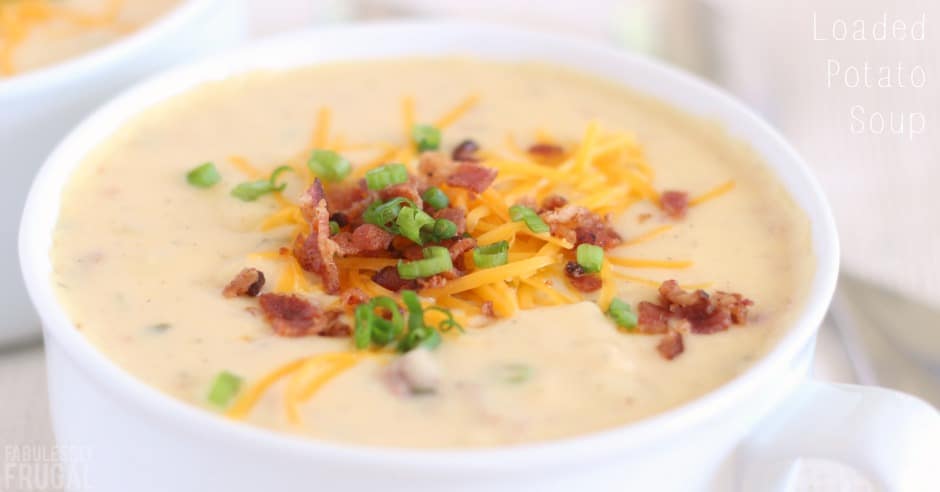 If you’ve been looking for a potato soup pressure cooker recipe that is not only hearty but also simple to make, then you’ve come to the right place because that is exactly what I’m dishing out today. There is nothing like a hot bowl of potato soup—especially one that is also made with the smoky goodness of bacon.

This is a recipe that my aunt used to make all of the time, except the version she made was using a crock pot. I altered the recipe a little bit so that it was more suitable for the pressure cooker and then added a few tweaks of my own. The resulting soup is something that is perfect for a cold winter’s night and really sticks to your ribs.

For this recipe I decided to go with russet potatoes because they are starchy and hold up well in the pressure cooker. However, if you don’t want to use russet potatoes, then you choose a nice starchy potato like an Idaho potato or a Katahdin, or you can even go with a nice multi-purpose potato like a Yukon Gold or a Purple Peruvian (if you don’t mind the color). I would avoid, however, waxy potatoes like an Incan or Rose Gold potato or even purple vikings. These potatoes would drastically alter the texture of this soup. And that’s definitely something you wouldn’t want to do, especially considering the careful balance of textures and flavors in this recipe.

The first thing you’re going to want to do is to cook your bacon. You can either cook it in a separate frying pan or place your pressure cooker on its browning/saute setting and cook it in there. Just make sure that it gets nice and crispy. Once it’s done, then remove the bacon to a cutting board and give it a good rough chop, just enough to make it into tiny slivers. You can then place the bacon in a separate bowl and remove the bacon grease from the cooker. Now it’s on to the second part of our pressure cooker potato soup recipe.

Finely dice your onion, mince your garlic and cut your celery into thin pieces. Peel your potatoes and then chop them up into 1-1/2 inch cubes. Then place them into your colander and give them a good washing. Once you’ve done that, you can then pop them into your pressure cooker and throw in all of the veggies and the seasoning, salt, pepper, and the butter. Mix it all together very well.

Next, you’ll want to add bacon and chicken stock to your pressure cooker potato soup. I add the bacon to this stage of the soup, instead of placing it on the end product, because I want that smoky bacon flavor to work itself deep down into the potatoes. Of course, that means that the bacon isn’t crispy by the time it’s finished, but I think the increase in flavor counteracts the lack of texture. However, if you prefer to have crispy bacon with your potato soup, then you can always add it at the end. If you do indeed decide to wait then add the bacon when you get to the stage where you add cream and milk.

Put the lid on your pressure cooker and lock it down. Bring your cooker up to High Heat and then time 5 minutes. When the 5 minutes is done, quick release the steam and wait until the lid is cool enough to remove. Now remove the lid and allow the remaining steam to clear out. What you should have now is your potatoes and veggies sitting in some liquid. Good, that’s how it’s supposed to look. Now, you’ll want to grab your favorite potato masher and give everything in the pot a good mashing. This will turn the mixture into sort of a soupy mix. Just be sure not to over mash it. You want to leave some potato chunks in it to add some texture to the final soup.

Once your soup is the texture you want, add the whole milk and cream (and the bacon if you didn’t add it earlier). Mix everything together very well until it all incorporates. Now all that’s left is to place it into bowls and garnish it with shredded cheese, sour cream, and diced green onions. I like to serve my pressure cooker potato soup with oyster crackers, but you can serve it with saltines or maybe even a nice corn bread or soda bread. It all depends on what you and your family enjoy.

This recipe should easily feed 6 to 8 people. If you don’t have that many people to feed, however, I do think that it should be pretty easy to scale back the ingredients to make a smaller serving. Or if that isn’t possible, then you can always make the entire batch and then freeze what you don’t use.

The original recipe my aunt used also called for 2 medium-sized carrots but I edited it out of my final recipe because I didn’t feel like the carrots contributed that much to the final dish. If you’re a fan of carrots, then you can always add the 2 carrots back into the dish.

My aunt’s recipe also called for an extra onion. However, I removed that because I wanted to use green onions to garnish the final soup and I felt that all of that onion would overpower the rest of the ingredients. As is the case with the carrots, you can always add the extra onion in, if you prefer.

Best All American Pressure Canner for every purpose

The All-American Pressure Canner is a fantastic product, and I felt compelled to write about it here. Remember that you get…

Should You Buy Presto Pressure Cooker?