Every evening, supper seems to sneak up on us unexpectedly. It’s not so much that it surprises us, but that after a long workday, it can be difficult to muster the energy to prepare a substantial dinner. It can take so much time to prepare food items.

We must cram so many tasks into the brief period between the end of the workday and bedtime. Why make it more challenging than necessary? We recommend that you use tools that simplify the process for this reason. What about a pressure cooker or slow cooker to assist with meal preparation?

What is the distinction between a slow cooker and a pressure cooker? Even though both serve similar purposes, they operate very differently. The slow cooker is designed to simmer food, typically over several hours. This enables you to forget about it. In contrast, a pressure cooker is intended to cook food quickly. Rather than baking it for hours, a whole chicken can be cooked in mere minutes.

This article will explain the differences between a slow cooker and a pressure cooker. We hope that you will appreciate the value of each tool in its way and be able to employ them effectively. We will also list our favorite product options for each category.

Continue reading for a comparison of the pressure cooker versus the slow cooker.

Both slow cookers and pressure cookers serve valuable purposes. They can significantly facilitate dinner preparation by performing most of the necessary tasks. When using one of these small kitchen appliances, you only need to prepare the food for cooking and then serve it!

If you are looking for a good option, we will share some of our favorites and explain how they differ from one another. Then, for your convenience, we will conclude the guide with a brief comparison review.

Let’s commence, shall we?

What is a Pressure Cooker?

Almost certainly, you’ve heard of Instant Pot. In recent years, this phenomenon has swept the globe. It is one of our preferred pressure cookers, which we will discuss in greater detail shortly. It has been around for a long time, but the Instant Pot revolutionized the art of pressure cooking.

A pressure cooker uses steam pressure to function. The food-containing pot is sealed, and steam builds up to create pressure. This helps to cook the food inside efficiently and quickly.

Many pressure cookers have a variety of settings and can cook virtually any type of food. You can cook entire meals at once and significantly reduce your cooking time. Additionally, since you only use the pressure cooker’s pot, there are fewer dirty dishes and less mess!

The concept underlying the pressure cooker is not new. This device has existed since the 1600s. It took considerable time to perfect the concept and make it safe for use. As a result of the buildup of steam pressure, pressure cookers have been known to explode when improperly managed.

How a Pressure Cooker Works

We’ve already discussed steam-powered pressure cookers, but how does this expedite the cooking process? The liquid must also be added when placing items in a pot. As the liquid is heated in the cooker, it becomes steam. Steam pressure is regulated by a valve on the pressure cooker’s lid.

Essentially, the steam pressure raises the boiling point of the water or liquid inside the pot, allowing it to reach up to 250 degrees Fahrenheit. The high temperature accelerates the cooking process.

In addition, the increased pressure of the steam accelerates the liquid absorption rate into the food. This forced liquid not only tenderizes the food but also speeds up its cooking. Your food comes out fully cooked and even caramelized, not merely steamed. Typically, the flavor is deep and robust.

Recipes for a Pressure Cooker

If you are familiar with pressure canning, you know it takes place in a pressure cooker. Some of you may have grown up in households where fruits, vegetables, and other foods were regularly canned. You may have assisted in the loading and operation of the pressure canner.

Numerous delicious meals can be prepared in a pressure cooker. You can most likely cook anything you desire in them. Some pressure cookers include a slow cooker function.

Here are some of the most common foods prepared in pressure cookers. Remember that you can prepare various foods.

What is a Slow Cooker?

A slow cooker slow-cooks food. It utilizes a heated bowl with a lid instead of steam pressure. Crockpots are a common term for slow cookers. There is also a branded slow cooker.

The food in a slow cooker is simmered at a low temperature for an extended period. This allows you to set the temperature, place the food inside, and let it cook for hours without your intervention.

You can forget about it.

This allows you to place your food inside, set the timer, and return home to a fully cooked meal. Some meals take longer than others, but the benefit of this tool is that you don’t need to monitor the duration. You can do what you must while the food cooks.

At one time, slow cookers were primarily used for soups and stews, but people have become increasingly inventive, and there are so many delicious things that can be made with a slow cooker.

We have already mentioned that a slow cooker simmers food for an extended period. The food is not boiled, fried, or baked. These types of cookers utilize moist heat for simmering food. Slow cookers steam food, whereas pressure cookers are typically used for quick cooking. Both have a heating element that accommodates a pot and is covered by a lid.

A ceramic or porcelain pot is placed on the heating element of these cookers. Depending on the model, how the pot is heated (i.e., on the bottom or the sides) varies. They also come in various sizes.

When on, these cooks cook continuously. Some models feature timers that allow you to cook for a predetermined number of hours before the appliance turns off or warms.

Occasionally, you can even program them to begin cooking at a specific time if you’re feeling particularly sophisticated.

Recipes for the Slow Cooker

Intriguingly, slow cookers and pressure cookers can be used to prepare various identical foods. It is only a matter of how they are cooked during the process.

Soups and beans have always been cooked in slow cookers because they are simple and taste better the longer, they cook. However, a great deal of ingenuity has been applied to the slow cooker, and you can prepare a wide variety of dishes. Here are some suggestions for popular slow cooker dishes that you may want to try.

These are just a few common slow cooker-friendly ingredients. Don’t let these limit you. There are so many possible creations!

It’s fascinating how pressure cookers and slow cookers can operate differently but achieve similar results. In either case, the result is a meal you do not need to monitor from beginning to end. It’s a factor of convenience and simplicity designed to facilitate meal preparation.

The primary distinction between these kitchen tools is the method of food preparation. The pressure cooker uses steam pressure, whereas the slow cooker uses low heat to simmer food.

The pressure cooker cooks food quickly, whereas the slow cooker requires several hours. Both offer a variety of configurations and functionalities for managing the tool’s features.

We hope you find this guide helpful in understanding the differences between slow and pressure cookers. Please review the question-and-answer section for additional information.

Can Raw Meat Be Placed in These Tools?

Yes, both are fully capable of adequately handling raw meat!

Although a slow cooker does not require water, you may require moisture. A pressure cooker requires liquid or water to function.

What is the difference between a slow cooker and pressure cooker?

Why are slow cookers better than pressure cookers?

You can cook a delicious meal in a fraction of the time of a slow cooker or using your cooktop. You can turn out a slow cooker-style meal in under an hour. A pressure cooker won’t heat up the kitchen like using the oven.

Can a pressure cooker be used in place of a slow cooker?

Is chicken better in slow cooker or pressure cooker?

So can a Crock-Pot cook better chicken than an Instant Pot? Well, it really depends on what you’re making. The Instant Pot cooks chicken much faster than its non-pressure counterparts, but the resulting texture isn’t going to be the same as what you’d get with a slow cooker or Dutch oven.

What's the advantage of a pressure cooker?

Pressure cookers cook food quickly, deeply and evenly, and may allow foods to retain up to 90% of those water-soluble vitamins. Cooking in open containers (yes, even ones with a lid) exposes food to oxygen and heat, which can lead to dulled colors and diminished flavor.

Does food taste better in a pressure cooker?

The pressure cooker works by turning liquid into steam and cooking food in a sealed pot. The food doesn’t cook by boiling; instead, it cooks with superheated (almost 250ºF) steam. Because the food cooks faster and very little moisture escapes, the flavors are richer and more developed.

From stews, curries and legumes to steamed puddings and cheesecake, there isn’t much that won’t go in a pressure cooker. It requires less water than other conventional cooking methods and means more vitamins and minerals are retained. Lack of exposure to air also prevents oxidation of the nutrients in the food.

Both slow cookers and pressure cookers do a good job of tenderizing tough meat, but each makes meat more edible in a different way. A pressure cooker is an enclosed pot with a lid that locks to form an airtight seal.

Slow cookers are the best friend of a lazy chef,...

The Breville Fast Slow Pro is a stylish multicooker with... 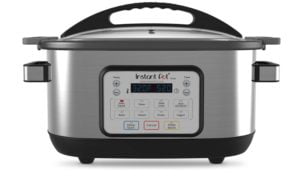 Advanced Microprocessor Technology is integrated into the Instant Pot Aura...