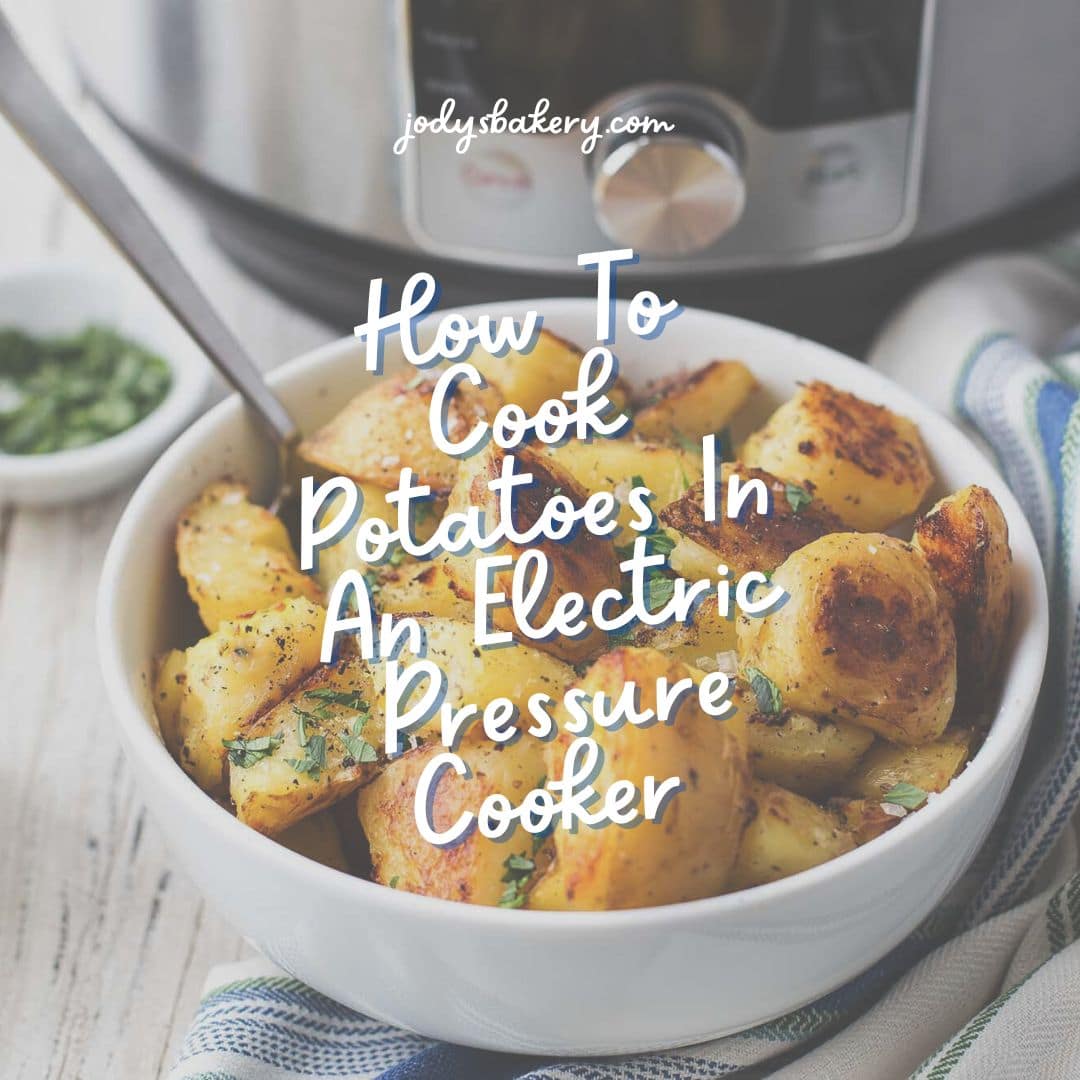 Potatoes are incredibly versatile. You can bake, mash, or serve them in casseroles. However, cooking potatoes in the oven can take quite some time. What if you do not have hours to bake them? How can you quickly prepare many potatoes to feed a large family? If you ask these questions, I will demonstrate how to cook potatoes in an electric pressure cooker!

Health Benefits Of Cooking Potatoes In An Electric Pressure Cooker

When a potato is pressure-cooked and cooled, a large portion of its starch is converted into “resistant starch” – a healthier starch that is not fully digested and is instead used by the body as fiber – lowering blood cholesterol and fats.

Beans, whole grains, and certain fruits (bananas) typically contain resistant starch; however, it can also be created by cooking and then chilling typically starchy foods (such as potatoes, rice, pasta, and bread). This “retrograded resistant starch” is not naturally present in these foods and can only be created by converting common starch through cooking and cooling.

Scientists in Spain used an autoclave to measure potato starch samples at 100°C (boiling), 120°C (equivalent to 15 psi), and 250°C to determine how much of the potato’s starch would convert into resistant starch.

An autoclave is a pressure vessel used for research and industrial applications that can operate from 1 to 50 psi or more (depending on the model) – they can be brought to pressure using water-generated steam, just like a pressure cooker. Although their paper does not provide precise data from their findings, their conclusion was.

Therefore, pressure cooking converts more of the potato’s starch into healthier “resistant starch” than boiling. If eating cold mashed potatoes does not appeal to you, that is fine. Reheating does not destroy this newly formed resistant starch; it increases it.

How To Cook Potatoes In An Electric Pressure Cooker

This method works with any potato with white flesh (sweet potatoes require a different cooking time). Use whatever potato variety is optimal for the intended purpose: baby potatoes, russets, Yukon golds, or standard white potatoes.

After selecting potatoes, scrub and cut them into one 1/2-inch pieces. It takes at least 20 minutes to cook whole potatoes in a pressure cooker. While the interior is creamy, the skin tends to crack and become soft, so I cannot recommend this method wholeheartedly.

How To Cook Potatoes In An Electric Pressure Cooker

If you want to cook many potatoes in a short amount of time, pull out your electric pressure cooker!

Here is how to cook potatoes in an electric pressure cooker. I used my beloved 8 Quart Instant Pot Pro 10-in-1 Pressure Cooker to cook a ton of potatoes for several prominent family recipes.

Tips On Cooking Potatoes In An Electric Pressure Cooker

How to Reheat Boiled Potatoes

It depends on the amount of food, in this case, potatoes, being reheated—the temperature of the room and the food. If the potatoes are not thoroughly heated, cook for an additional 2 minutes. The heat moistens the potatoes, causing them to become steamed once more.

Place the valve in the venting position and quickly release the Instant Pot. Open the pot and remove the potatoes for immediate service.

If not using the potatoes immediately or preparing a large quantity, several ways to store them. Always allow the potatoes to cool completely:

Timing is an Instant Pot vs. a Stovetop Pressure Cooker

This recipe is compatible with both six- and eight-quart models as written. If you have a mini (three quarts), you may need to add one minute to the cooking time or use a natural release. The three-quart cooker is less powerful than larger models and uses a lower PSI.

Some modern models employ a computerized pressure release system that prevents a quick release if the pot is too full. This safety mechanism is intended to avoid dangerous splatters, but it can sometimes be accidentally activated. Do not panic if your pot will not release the pressure. Your potatoes will still be perfectly cooked if you allow the pressure to release naturally. Instant Pot Pro 10-in-1 Pressure Cooker

How To Cook Potatoes In An Electric Pressure Cooker - FAQs

What is the scientific principle behind a pressure cooker?

A pressure cooker is a sealed chamber that traps the steam produced as its contents are heated. As moisture builds, pressure rises, pushing the boiling point of water beyond 212°F. This higher temperature shortens cooking times and extracts flavor from foods more efficiently due to the absence of evaporation.

What is the significance of a pressure cooker?

Pressure cookers force liquid into food, speeding up the cooking process and allowing cooks to tenderize tough foods quickly. In addition, the extra heat they generate increases caramelization and browning, allowing for the creation of complex flavors.

What Size Should Potatoes Be for Cooking in a Pressure Cooker?

Potatoes come in a variety of sizes. To pressure cook them quickly, they must be approximately 1.5 inches in diameter.

What will you do with the pressure-cooked potatoes?

Must potatoes be pierced before pressure cooking?

Potatoes are dense and, when cooked, want to release the steam that builds up within them. Using a fork, you can puncture the potatoes to release steam.

I never poke holes in potatoes, especially when using starchy potatoes. They are already prone to disintegration, so creating holes will accelerate the process. If you are using waxier or more solid potatoes, it is worthwhile to poke holes in them.

How long does it take for potatoes to boil in a pressure cooker?

Place potatoes in a single layer in the pressure cooker and secure the lid. Cook over high heat for 5 to 10 minutes, or until the pressure regulator reaches 15 psi. Remove from heat.

How much water is added to an electric pressure cooker?

When learning how to use a pressure cooker, ensure that the unit is never more than two-thirds full of liquid so that steam can accumulate.

Can potatoes be boiled in an electric cooker?

It is quick and straightforward to boil or steam potatoes in an Instant Pot pressure cooker! It always turns out perfectly and can be used to make dishes such as Potato Masala for Dosa, Spicy Potato Sandwich, and mashed potatoes. Cooking time is primarily determined by the size and variety of potatoes.

What happens if too much water is added to a pressure cooker?

The effects of overfilling a pressure cooker include flavor and texture loss. This is due to the excess pressure generated by the abundance of liquid. Too much pressure degrades food. If the pot is overfilled, it is also possible for the food to block the pressure valve.

Can I utilize my pressure cooker without water?

Can oil be used in a pressure cooker?

How do you boil baby potatoes in a pressure cooker?

There is no difference between boiling regular potatoes and boiling other potatoes. Therefore, you can undoubtedly boil baby potatoes using the above recipe.

After cooking the potatoes in a pressure cooker, they can be served with fresh herbs and melted butter. You could also use them for salad, mashed potatoes, or fries. Here, the options are limitless, and you can choose how to prepare anything. There is also the option to delay their use. The cooked potatoes can be stored in an airtight container. They will be fine for a total of five days. Ideally, you should cook them immediately for the best flavor and experience!

Home / Guides / How to pick the best pressure canner...